Join our campaign for fairer tax for Scotch in the UK

Join our campaign for fair tax for Scotch Whisky

In 2019, the UK government committed to "ensure our tax system is supporting Scottish whisky and gin producers."

Two years after this promise was made the Chancellor announced proposals for a reformed alcohol duty system which would put Scotch Whisky and other spirits at an even greater competitive disadvantage than under the current - already unfair - system.

It is time for the Chancellor to think again.

In the Queen's Speech in 2019, the UK government promised to "do more" to #SupportScotch and "review alcohol duty to ensure our tax system is supporting Scottish whisky and gin producers and protecting 42,000 jobs supported by Scotch across the UK." Two years after this promise was made, the Chancellor announced proposals which will embed the competitive disadvantage faced by distillers in Scotland and across the UK.

Our view is simple - the Treasury’s excise reform proposals fall short of the mark. Not only do they fail to meet the commitments previously made to the industry, but they propose to make a flawed system worse. It is time to think again. 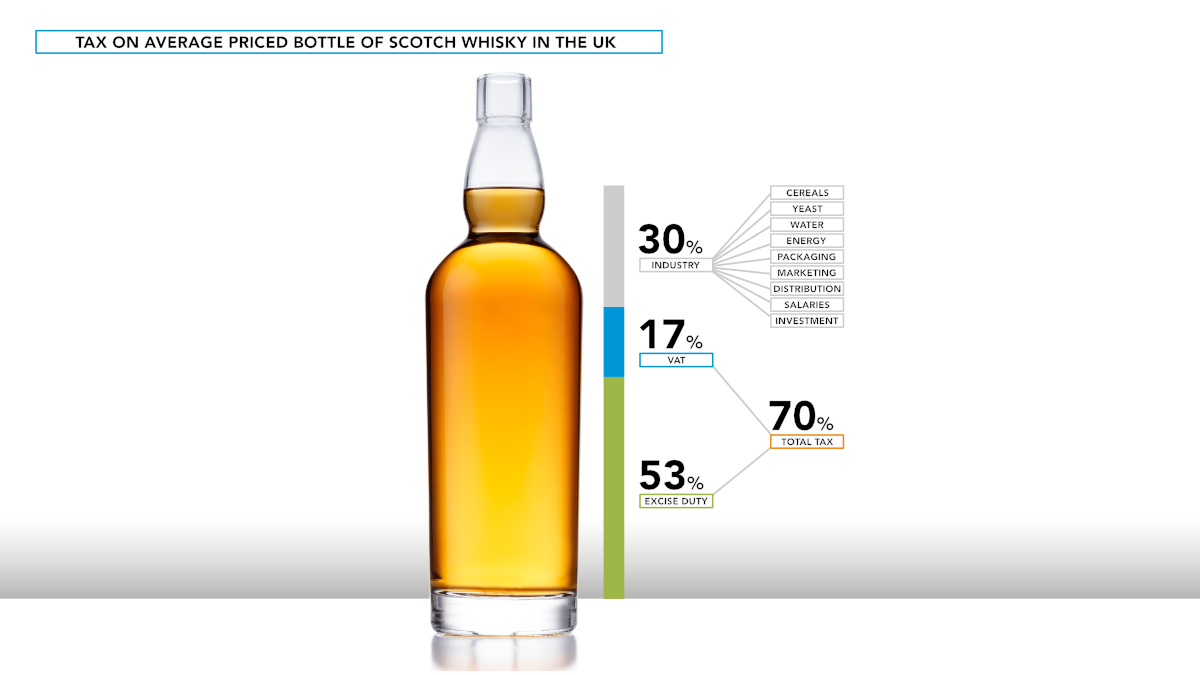 The UK's review of Alcohol Taxation

What is the alcohol duty review?

The duty review formed part of the Conservative Party manifesto ahead of the December 2019 General Election. For many years, the SWA has argued that the current system is unfair to Scotch Whisky and that the outdated system should be reformed. In 2019, we secured commitments from the Conservatives – as well as the SNP and Liberal Democrats – that duty reform should be a priority for the next government.

The Queen’s Speech in December 2019, which sets out the government legislative plans for coming year, said that the government would “review alcohol duty to ensure our tax system is supporting Scottish whisky and gin producers and protecting 42,000 jobs supported by Scotch across the UK.”

Two years on, where are we with the duty review?

In October 2020, HM Treasury launched a ‘Call for Evidence’ and the SWA has submitted a response on behalf of our members. In October 2021, the Chancellor set out reform proposals in a consultation which will end on 30 January. The SWA will respond to this consultation setting out how the Chancellor has made an unfair system even worse for Scotland's national drink.

How do the reform proposals put Scotch Whisky at a greater competitive disadvantage?

The Call for Evidence stated: “when compared on per unit basis the duty system as a whole is highly inconsistent.” This is true. Under the current system, per unit of alcohol, Scotch Whisky - and other spirits – are taxed 16% more than still wine (12% abv), 51% more than beer (4% abv) and 185% more than cider (4% abv).

The Chancellor's proposals would make some elements of this system even worse. Scotch Whisky and other spirits would be taxed 11% more than still and sparkling wine (12% abv); 51% more than beer (4% abv), climbing to 59% under the ‘draught relief’; and 227% more than cider (4% abv). UK spirits duty would remain 82% higher than the average across EU member states and the highest in the G7. And the Treasury would have given tax cut to the majority of the cider market in the UK, in the on and off trade; a tax cut to beer in the on trade; a 25% tax cut per unit of alcohol to imported prosecco, cava and champagne, which makes up the vast majority of the UK sparkling wine market - but nothing to support domestic spirits producers.

You can see the unfairness to Scotch Whisky of the current and proposed systems in the graphs below. 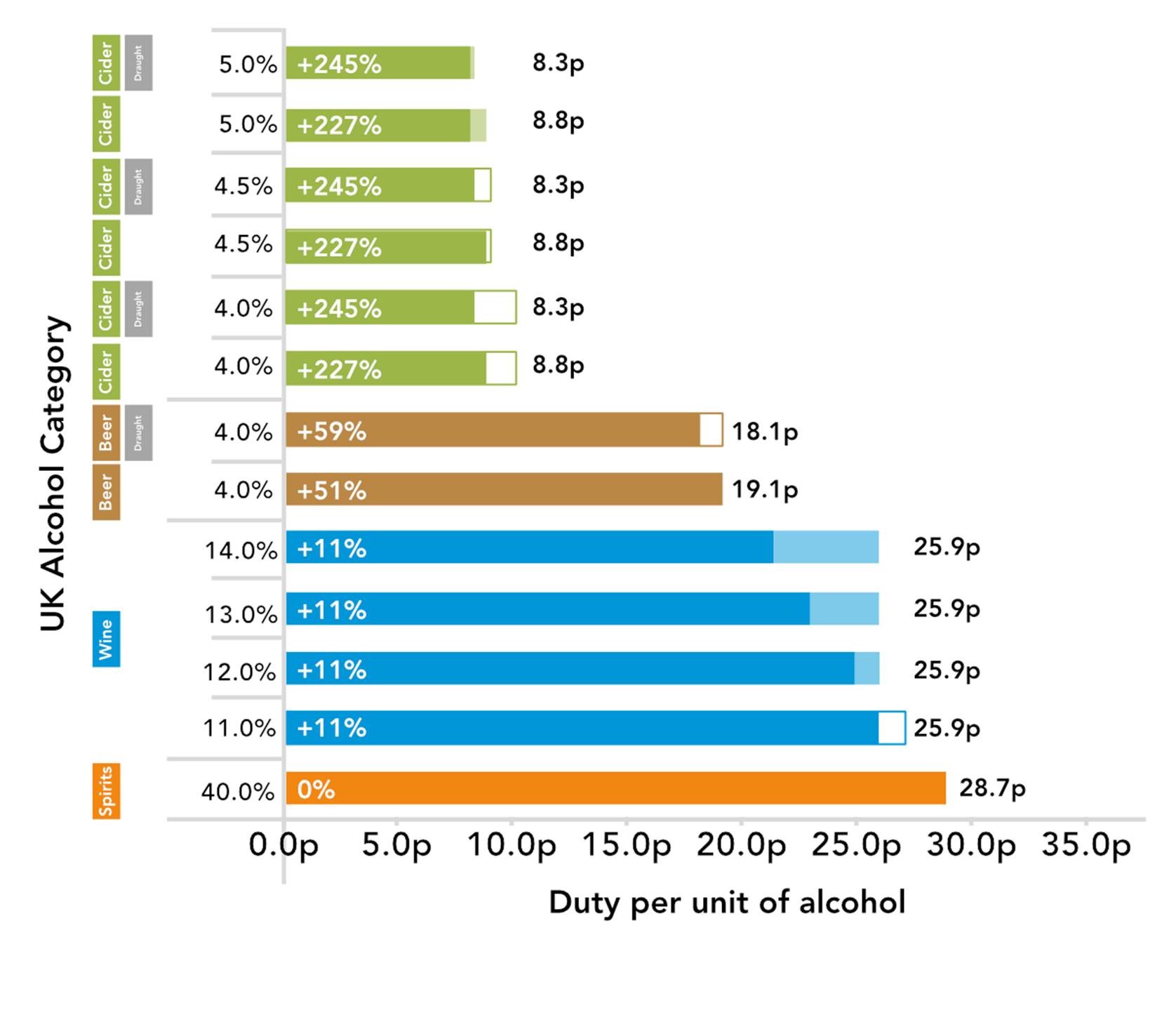 We think the reformed system should be clear for consumers and fair for industry. After all, the government’s own Chief Medical Officers’ guidelines on low-risk consumption say adults should drink no more than 14 units a week of alcohol. The guidelines do not discriminate between categories of alcohol, and we don’t think the tax system should either.

What about the other reforms set out by the Chancellor?

What are the next steps?

It doesn't have to be this way. A reformed alcohol tax system can be clearer, fairer for consumers, make UK-based businesses more competitive and continue to deliver significant revenue to HM Treasury while protecting public health. This has always been the goal of our campaign to reform alcohol taxation in the UK - it is time the Treasury listened.

How can I get involved?

Help us to ensure tax fairness for Scotch Whisky and other spirits.

Tell us you have emailed your MP by emailing info@swa.org.uk so we keep you in touch with our campaign to end unfair tax on Scotch Whisky.

Some suggested tweets below:

If you #SupportScotch, write to your local MP, use the hashtag on social media.