Nearly three in four Scots (71%) believe the tax on Scotch Whisky in the UK should be at least as competitive as European taxes on flagship food and drink products, according to a Survation poll commissioned by the Scotch Whisky Association.
Tagged with:

£3 in every £4 spent on the average priced bottle of Scotch Whisky in the UK goes directly to the Treasury in taxation. Scotland's national drink is currently taxed 76% higher than the EU average for spirits. Ironically, it is cheaper to buy a bottle of Scotch in France than it is in the home of Scotch.

The industry recently reported a record 1.9 million visits to distilleries and tourist centres in 2017. Many of those tourists are shocked at the level of taxation of Scotland's national drink in its home market, with distilleries facing the 4th highest rate of spirits duty across the EU. The Scotch Whisky Association is calling on the UK Government to continue to support Scotch Whisky at home through a duty freeze in the Autumn Budget.

The freeze on spirits excise duty announced by the Chancellor in November 2017 has delivered £1.6bn for the Treasury in the period February to July - a 7.5% (£114m) increase on revenues during the same period in 2017.

Nearly three fifths (57%) of those questioned claimed the UK government could do more to support the Scotch Whisky industry, which is responsible for a fifth of all UK food and drink exports, worth over £4 billion a year.

"The Scotch Whisky industry is working hard to boost our exports and improve trading conditions for Scotch all over the world. As we do so, we are calling on the government to recognise the contribution we make to the UK's balance of trade in goods and back us at home."

"It is inconceivable France would hamstring its wine industry through heavy taxation. Yet, despite Scotch Whisky generating billions in revenue for the economy, employing thousands of people, and attracting millions of tourists every year, it remains among the most taxed food and drink products in Europe.

"That is why we are calling on the Chancellor to continue to freeze duty on spirits in this year's Budget. The evidence shows that a continued freeze would not only deliver greater revenue for the Treasury but also help to support an industry that has invested more than £500m in capital projects over the last five years."

...we are calling on the government to recognise the contribution we make to the UK's balance of trade in goods and back us at home. 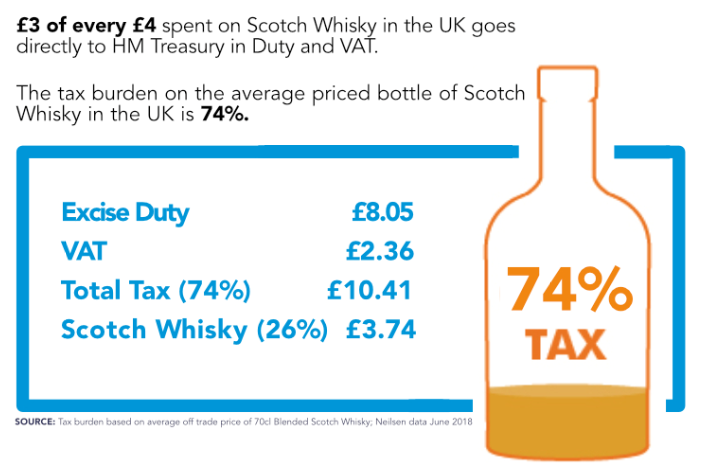